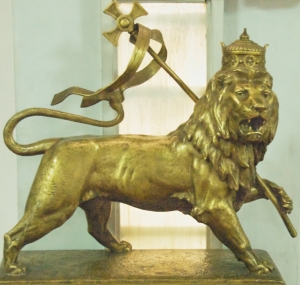 In the story of The Knights of the Lion of Judah, I am exploring a future segment of the galaxy settled by humanity by way of hyperspatial drives. Hyperspace, however, does not follow the contours of normal space they way that it was originally expected it would, meaning that traveling to the hyperspatial west might not take you to the star that is closest in that direction to your start point in normal space. This makes traditional astronomy useless in settling the stars, meaning that all of these:

… had to be explored and settled by courageous star-travelers one by one. Astrophysicists still study the stars, but only really as part of exploratory missions, from quite close to the source. Large telescopes and observatories are now used for tracking objects within a system only… objects that include numerous warships.

That is where the twin orders come in: the Knights of the Lion of Judah and the Sisters of Our Lady of Victory. They defend human powers from incursions by hostile alien nations, and maintain a limited peace between humans; Man may war with Man, but only according to rules of engagement that limit attacks on populated worlds, decrease the lasting damage done to the economies of the conquered, and slow the pace of conquest. Most major human powers prefer to set up puppet regimes and annex ‘peacefully’, than get bogged down by the orders’ rules in combat that favors determined defenders willing to engage in attrition tactics.

The Knights and Sisters, drawing on a wide base of support from across humanity’s width and breadth, maintain a large, technologically advanced military force, from mechs on the ground to cruisers and carriers in space, to enforce their rules, but the major and minor powers are always testing the boundaries of their goodwill. The twin orders are always maintaining a dynamic tension internally, as some wish to try to impose a more serious, lasting imperial peace over humanity, while the rest work to stay true to their founding five principles: justice, courage, solidarity, subsidiarity, and faith.

Anyway, I was too excited to wait until my self-imposed start-date of 9/1/18, so I thought I’d throw a little blurb about what I’m doing right now up. I’m currently working on building up a few posts for a buffer around here, and keeping on with my missions: my family, my work, and my writing.

For now, respectfully, this is Matthew Ess.

One thought on “The Worlds of the Twin Orders”

This site uses Akismet to reduce spam. Learn how your comment data is processed.