SaSS:R is, as I mentioned last night, coming along. Some things I can lift, reformat, and paste verbatim from earlier versions of SaSS. Other things need a bit more work–some rewording and reworking. And still other things have to made up fresh. But at 99 pages (only 21,000 words, because the tables and formatting take up a lot of page-space), it is looking good. It is not yet as long as the longest earlier iteration, but with that one I took the whole “going power-mad with spreadsheets and tables” thing a bit too far.

Let me show you how SaSS has changed. This is some of the content from SaSS: Crystal Stars (two versions before the current one, and a setting I want to come back to much later):

Basically, I have adapted the scales of damage from Cortex Classic (which I have played and run for) and Rifts (which I have not played, but have borrowed and read) to address the problem of wild damage values like the one I posted above. There are now three levels of damage, the second (Huge or “H”) being 10 times higher than the first, and the third (Quintuple-Huge or “Q”) five times higher than that (though that one is only going to be used for larger military warships.) Physical Health damage, Huge damage, and “Q” damage will make it a lot easier to roll for damage, and a lot easier to read and understand the damage notation.

This allows for me to give a range of 10-50 Physical Health damage without having to go the cumbersome “5d10” route (and yes, I know that is a range of 5-50 damage.) I’m hoping my players will like the change, though for some damage values it remains… meaty, as you can see below with the .50 caliber rifle entry from SaSS:R. “d20+d12+4,” because a .50 caliber rifle should do a lot of damage to a person, even as a graze.

I’ve also been working on finishing the various religions, cultures, and professions, as those are the core of character creation. I thought I’d try (again) to introduce you to the fanciful religion of the bunch: the Azatlani faith. 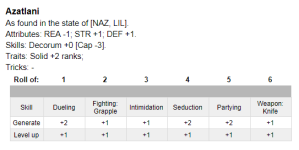 The faith of the Hispano-Aztecans, and the main reason the New Azatlan state struggles to get and maintain alliances, Azatlani is a syncretic faith mixing elements of Christianity with Aztecan native religion. Like most Christian heresies, it ultimately denies the divinity of Christ, but instead views him as the highest of humans, sinless and perfect, who sacrificed himself as the first of the “New Sacrifices” to pay humanity’s debts to the gods willingly. As such he was resurrected and taken bodily into the sun-god’s realm to rule all of humanity.

What tends to make other, even non-Christian, nations rather unsettled on the idea of allying with New Azatlan is the fact that the Azatlani faith continues to do human sacrifice, though now of willing adult victims rather than children, slaves, and prisoners of war. Every year, 1,460 willing adults are crucified and then, after a day of that torture, have their hearts pierced and then removed, with their other remains being used, while still fresh, to reconsecrate the various Azatlani temples around the country. This is done to guarantee that the world will continue to operate: the sun will still rise, the moon and stars will still light the night sky, the rain will still fall, and new life will be created.

This might sound crazy–and it really is incredibly so–but in spite of the diplomatic consequences of it, New Azatlan is widely regarded as weak but un-conquerable. This is thanks to its people’s skill at guerrilla warfare… and the odd happenstances that tend to happen whenever invasions are attempted–such as the combination blow of earthquake and tsunami that struck a Scottish Republican and Imperial Brasilian marine landing, or the unseasonable hurricane that struck an air/naval invasion force from the Grand Duchy of Holland.

Anyway, I am hoping to get to doing some Knights of the Lion of Judah (Lions of Judah) writing this week, and if I do manage you can expect more Lions of Judah ship and/or mech stats. I think I will need to find a new artist, because the friend I wanted to do it has been too difficult to pin down into doing it, so if you know anyone who would like to make some extra money drawing ships and mechs, let me know.

This site uses Akismet to reduce spam. Learn how your comment data is processed.